Lyrics:
Come in here, dear boy, have a cigar
You're gonna go far
You're gonna fly high
You're never gonna die
You're gonna make it if you try
They're gonna love you
Well, I've always had a deep respect
And I mean that most sincere
The band is just fantastic, that is really what I think
Oh, by the way, which one's Pink?
And did we tell you the name of the game, boy
We call it Riding the Gravy Train

We're just knocked out
We heard about the sell out
You gotta get an album out
You owe it to the people
We're so happy we can hardly count
Everybody else is just green
Have you seen the chart?
Its a helluva start, it could be made into a monster
If we all pull together as a team
And did we tell you the name of the game, boy
We call it Riding the Gravy Train

Roger Waters talks about how Have a Cigar was written: "By taking Shine On as a starting point, and wanting to write something to do with Shine On i.e. something to do with a person succumbing to the pressures of life in general and rock 'n' roll in particular... we'd just come off an American tour when I wrote that, and I'd been exposed to all the boogaloo..." [Shine On]

Roger: "The line 'By the way, which one's Pink?' came from real experience. We always look at it as a joke, but it used to be a fairly common line that got asked to us by interviewers and joe-publics. They really used to ask that." [Miles]

Roger: "The verses (tune and words) were all written before I ever played it to the others. Except the stuff before and after the vocal, that happened in the studio. The same with Welcome to the Machine – the verses were done, but the run up and out was done in the studio. Dark Side was done much more with us all working together. We all sat in a room for ages and ages – we'd got a whole lot of pieces of music and I put an idea over the whole thing and wrote the words. Having laid lyrics on the different bits we decided what order to put them in, and how to link them. It wasn't like the concept came first and then we worked right through it."

Roger commented on Roy Harper doing the lead vocal: "A lot of people think I can't sing, including me a bit. I'm very unclear about what singing is. I know I find it hard to pitch, and I know the sound of my voice isn't very good in purely aesthetic terms, and Roy Harper was recording his own album in another EMI studio at the time, he's a mate, and we thought he could probably do a job on it. I sort of expected them to say 'No, you do it, Roger' but they didn't, they said 'Great idea!' I now wish that I had done it... just one or two little things that I'd have done a bit differently." [Miles]


Dave Gilmour: "Have A Cigar was a whole track on which I used the guitar and keyboards at once. There are some extra guitars which I dubbed on later, but I did the basic guitar tracks at one time." [Miles]

The snatch of classical music heard directly before Wish You Were Here begins is from Tchaikovsky's 4th Symphony. 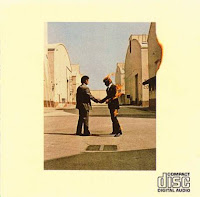